At a distance of 5 km south-west from the centre of Sparta and on the hill of Agia Kyriaki, which is roughly 600 m. east of the settlement of Sklavochori - Amykles, lie the remains of the ancient Sanctuary of Apollo Amyklaios. According to written sources (e.g. Polybius 5.19.3) the sanctuary constituted the most important religious centre of the Lacedaemonians in the ancient era. The identification of the sanctuary’s location was confirmed by the discovery, on the hill and the surrounding area, of sealed splinters from a tiled roof, on which the words Apollo and Amyklaioi are imprinted (Tsountas 1892, 3-4), as well as inscriptions (Tsountas 1892. Skias 1918. 32-35. Fiechter 1918, 220-223. Buschor-von Massow 1927, 61-64. IG V 1.27, 145, 511, 823. SEG 1.87-88, 11.689-691, 11.790). Unfortunately, the detection of the location of the Amykles settlement in antiquity remains vague.

According to Christos Tsountas and the conclusions of his research, during the Early and Late Bronze Age the sanctuary should be placed at the southeastern side of the hill. Taking into consideration the information provided by Polybius (5.19.2), referring to the distance of the sanctuary from Sparta and Amykles, which states that it was found on the sea-facing, southern side of the settlement, as well as the fact that another important sanctuary of the ancient city, that of Alexandra Kassandra (Paus. 3.19.6), was located near to the modern village, it is believed that the ancient city spreads to the north and mainly west of the hill of Ag. Kyriaki, towards the modern village of Amykles.

The specific area surrounding the sanctuary is characterized by low, smooth hills that have been shaped by the alluvial deposits of the Eurotas river. To the east, the slope of the hill is very steep, in opposition to its other sides that are quite smooth. A small crease, or rather, a sinking of the ground defines the hill to the west, while a slope connects it with the wider, smoother configuration of the ground to the North. At this particular spot, we find the current access to the archaeological site. The elevation of the sanctuary offers an open view to the south, framed by the mountains of Taygetos to the west and of Parnonas to the east. The fertile ground of the area is intensively cultivated with various rural crops. 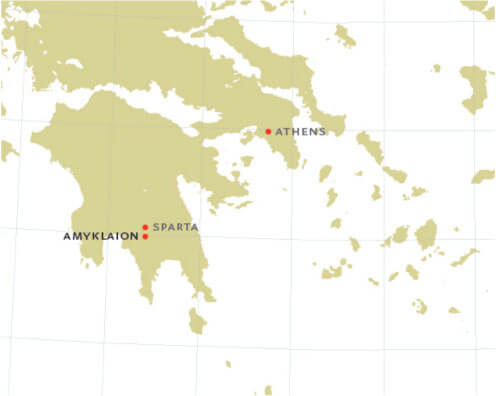