The aim of the excavation work in 2021 was the systematic excavation of the area on the southwestern slope of the hill of Ag. Kyriaki, defined by the trenches AA 1, AA -1 and AA -2, within the declared archaeological site and exactly on the boundaries of the expropriated land to the south. The purpose of this intervention was the systematic investigation of the stratigraphy in the remaining part of the existing archaeological site, as a continuation and completion of the work carried out immediately north of this zone in 2018-2019. The area in question was of particular interest as evidence for the dating of the sanctuary and the interpretation of the specific area emerged.

In particular, the natural porous chalk ground (kimilia) was revealed throughout the area under investigation, which, in contrast to its north-facing part, has been detached here for the most part, creating a deep cavity with a south-facing slope. In order to even this difference in altitude of approx. 0,40 m. and to create a flat corridor across the whole area, a retaining wall was built, of approx. 0.60 m. in thickness, oriented NW-SE almost parallel to the geometric enclosure and at a distance of approx. 5m. from the wall. The wall consists of roughly-worked large sized limestones at the foundation trench and the front, while medium and small sized rough stones have been placed internally and in the upper structure. The structural details and movable finds suggest that the upper visible layer of stones belongs to the modern period, when it was used as a dry stone wall in the context of agricultural activities in the area.

On the contrary, from the foundation of the wall it is understood that with this construction the containment of the soil from erosion was achieved, creating at the same time even surfaces with surcharges, in two phases of antiquity: the late Geometric period and the end of the 6th century BC. More specifically, the undisturbed stratigraphy inside the wall, towards the north and the sanctuary, shows that immediately above the porous chalk ground (kimilia) a strong layer of rough stones occurred, mainly of small size, apparently to ensure better water drainage. Immediately higher up follows a layer of light-coloured porous chalk (kimilia) with a large quantity of pottery of the late Bronze Age and, primarily, of the Geometric period. The majority of these are fragments of drinking and ritual vessels, as well as metal objects (bronze jewellery and iron tools). These two layers, S5 and S4 of aprox. 0.35 m. thickness, consisting the first level that was formed at the same time as the construction of the retaining wall, thus creating a level surface that functioned as a corridor along the entire length of the southern slope of the hill. The large number of movable finds also indicates that the backfill also served as a repository for material from the rituals of the Hyacinthia festival during the Geometric period.

This very concept of the deposit, along with the significance of the material used for the needs of the backfill of an area, is also highlighted in the next layer S3, which follows at a higher level and can be attributed to the Archaic period. Here, the layer of approx. 0,18 m. consists of brownish soil mixed with a large quantity of finds, mainly from the 6th century BC, which are related to the practices of the festival of the Hyacinths. Miniature vases and above all the aryballoi, predominate in number, while a quantity of lead votives such as wreaths, figures of warriors, deities or daemonic figures and bone plates were also recovered.

Finally, the stratigraphy shows that from the late Byzantine period onwards the area was covered by soils for the needs of agricultural crops, as is evident from the composition of the soils and the corresponding finds in layers S2 and S1.

As mentioned, from the removal of the undisturbed ancient fill, with a total thickness of approximately 0.50m, and as shown in diagram 1, a significant amount of pottery of various periods was recovered, with most of it belonging to the Geometric (59%) and Archaic periods (29%).

From the earliest phases, parts of Mycenaean figurines of Psi type stand out, while the sherds of the Geometric period bear familiar motifs, such as concentric circles, grids and representation of birds (figs. 5-6). Also collected were intact and fragmentary miniature vessels of the Archaic period - mainly aryballoi, but also kraters, lakainae, amphoriskoi, kanthariskoi, etc., as well as fragments of metal (knives, jewellery, lead wreaths, etc.) and bone objects.

Based on the results of the research, it is documented from the excavation that in the south-western part of the sanctuary and outside the enclosure of the late Geometric period, the area was utilized from the early 7th century BC onwards as a depository and as a corridor, extending to the east and supported by a retaining wall on its southern edges, thus forming an even and variously exploitable spacious zone in this area.

For the more accurate recording and collection of information and data of the systematic excavation, the excavation trenches and the site as a whole were documented, scetched and mapped using innovative technologies (use of drone, photogrammetry and orthophotography with topographic georeferencing points, multispectral UV and IR photography, and the relevant software pix4d and metashape). In addition, the integrated documentation system and the Geographic Information System (GIS) of the Amykles Research Project were completed and enriched with the new data.

Despite the restrictions imposed by the COVID pandemic in 2021, the study of material by the collaborators of the Amykles Research Project, Dr. Adrien Delahaye (École française de Athene) and Dr. Christian Mazet (École française de Rome), was carried out, continuing the recording and documentation of the pottery from the excavations of 2020, 2019 and, to a lesser extent, 2018. This material originates from the southern sector of the hill and in particular the confluence between the monumental enclosure of the late 6th century BC and a part of the earlier enclosure dating to the late 8th-early 7th century BC. In this area, large mixed deposits of votive materials were found, as well as undisturbed stratigraphic units dating from the late 8th to early 7th century BC. 112 objects were selected, studied, photographed and drawn. Some samples were analyzed with a portable clay microscope (Jiusion 40 digital microscope, 1000x), while other samples will be subjected to petrographic and XRF analyses. The resulting data are incorporated into the online database of the Amykles Research Project.

The study led to the determination of the chronological framework of the votives of the sanctuary, recording the period of its heyday and its monumental enhancement from the beginning of the 7th to the 4th century BC. With regard to the Laconian pottery, this includes an open Laconian 1 type fragment depicting a human head with schematic features, a small decorated Laconian 2 type bowl, several decorated and plastic spherical 6th-century aryballoi, several fragments of Laconian craters and kothonoi with black glaze, and a fragment of an epinetron with relief decoration. Among the Archaic vases imported, we note the presence of a pear shaped aryballos and a Corinthian black figured alabaster, as well as an Attic black figured fragment. From the pottery of the Classical period, fragments of large pinakes with black glaze and relief or incised decoration stand out.

In addition, from the excavation work of 2018, apart from the fragments of a plastic "pilgrim flask" type aryballoi and an open vase with vertical walls, those of a laconic bowl with black glaze and disc-shaped base are of special interest In fact, the 21 fragments of the bowl were welded together, despite their poor state of preservation and severe corrosion. This vase comes from a possible foundation deposit located in the inner western corner of the so-called southern building and provides a terminus post quem for the construction of this building in the late 6th century B.C, the period of the construction of the throne and the monumental enclosure of the sanctuary.

Finally, the preliminary study of the micrographic vessels (especially the aryballoi) resulted in an initial typology, which, due to the large number of finds (about 4000), will be completed and studied in depth during the next research phases. 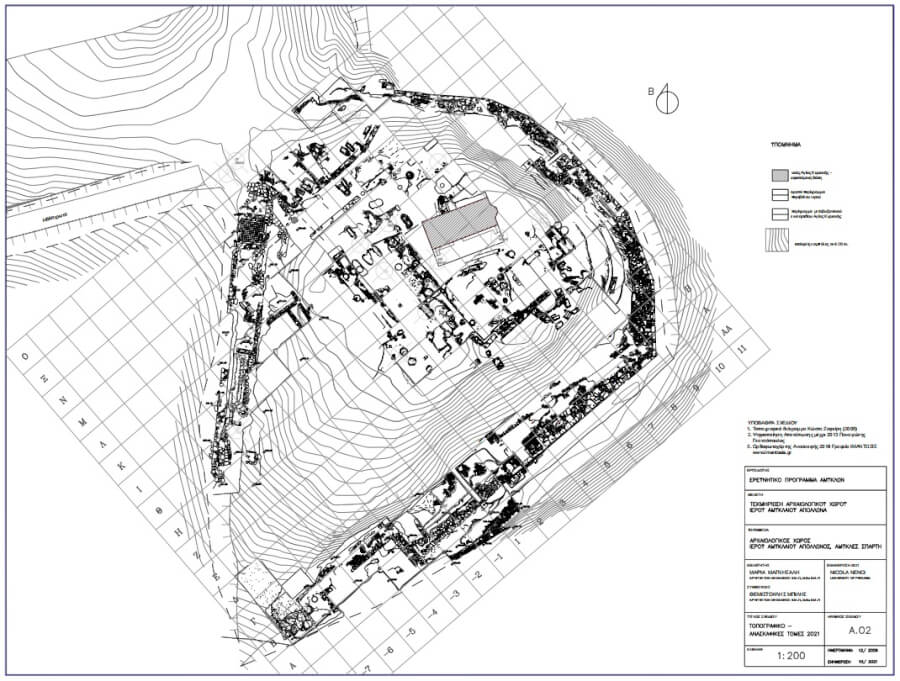