In 2011 and in accordance with the decision No. YPPO/GDAPK/ARCH/A2/F2/113171/1872/4.8.2011 of the Department of Greek and Foreign Scientific Institutions, Organizations and International Matters of the Ministry of Culture, regarding the ongoing project in the Spartan Sanctuary of Apollo Amyklaios, the following works were carried out:

I) Excavations
1. Investigations were continued in the north part of the sanctuary and specifically in the area between the ruins of Late Antique constructions and the church of St Kyriaki (sectors Μ5-7, Ι-Λ6-7), in order to locate other possible interventions. In sectors Μ5-6, south of the late building remains and at a very slightly higher level, a horizontal surface was revealed, the floor of which is covered by a fine coat of lime plaster. This flat surface is defined to the south by a cutting (width 1 m. and depth 0.20 m.) in the bedrock, which covers the south limit of sector Μ5 along its entire length and its continuation eastwards into sector Μ6. There, two roughly worked boulders were found in a crevice in the natural conglomerate rock. This cutting has been uncovered for a length of 7 m. and may well have been the foundation trench of a wall that defined the flat space towards the hilltop in sectors Μ5-6. The same space extends eastwards but in about the middle of sector Μ6 its destruction by subsidence was ascertained. Its west end, in sector Μ4, where additional excavations are pending (sectors Μ1-3), remains to be clarified.
At about the centre of sector Λ6 one more circular ditch was located and uncovered. In contrast to the others, it had been opened in the poros subsoil and not in the conglomerate mass of the hill. The walls are revetted with rude stones of medium size. The inside was covered with similar rude stones and soft yellowish-grey earth. Only at the lowest level was a layer of soft dark earth and ash, 0.15 m. thick, removed.
At the northeast corner of sector Ι6 and the southeast corner of sector Κ6, outside the north wall of St Kyriaki church and about half way along its course, the west part of the foundation of an apse was uncovered. The surviving part is constructed of rubble masonry, of small and medium rude stones with mortar of lime plaster and gravel. This unexpected find can be attributed to the apsidal building excavated by Tsountas in 1890 and destroyed during the building of the new church. In technique, shape and dimensions it is comparable to the apse surviving in a symmetrically corresponding position about 20 m. further south and abutting the crepis of the throne. The excavated area yielded a relatively small quantity of pottery, from prehistoric to Byzantine, two fragments of terracotta zoomorphic figurines and one Byzantine coin.

2. In order to unify the areas in which the two most important architectural constructions of the sanctuary, the throne and the altar, are located, as well as to continue investigations on the hilltop, the excavation was expanded into sectors Ζ2-4 and Η3-4. The stratigraphy here is badly disturbed, due also to the earlier excavation trenches opened by Christos Tsountas in 1890 and Ernst Fiechter in 1907. The volume of earth removed, ranging in thickness from 0.20 m. to 1.00 m., belonged entirely to the level of the later fill and contained many contemporary objects – nails, fragments of roof tiles and pieces of lime-plaster. Under this fill and over all the excavated area, except Ζ2, a solid layer of pebbles was revealed. As in the area of the throne, which was investigated in the past, it was observed that this layer represents the highest surviving level of the natural surface of the hill. Along the east edge of sectors Ζ-Η4, a long and narrow ditch, 1 m. wide and 0.50 m. deep, was revealed, which to the south meets the large limestone blocks set at right angle in the northeast part of sector Ε4. The north end of the ditch has yet to be explored. In the course of removing the layer of contemporary fill in sector Ζ4, two fragments of architectural members of the throne were identified, a Doric column capital and a slab of the stylobate with traces of a mortise.
Two (2) destroyed burials were found in sectors Ζ3-4, one preserving parts of rubble-masonry walls, while the other – in the middle of the south edge of sector Ζ3 – fragments of architectural members of the throne (cross-beams and orthostats). In the same area a further five (5) circular empty ditches were excavated, similar to those found between the crepis of the throne and St Kyriaki church during works in recent years. From around the circular ditch uncovered in about the middle of the north edge of sector Z3, several bronze tubular necklace elements, two shells and one faience bead were recovered. Particularly interesting among the finds gathered from the remaining area of the sector is a bronze object with four symmetrical protuberances (one missing), which are interconnected and end in snake heads, one fragment of the body of a Late Mycenaean wheel-made clay bull figurine, one sherd of a Geometric vase with a male figure from a representation of a dance, the fragments of a small Ionic column capital and a smooth shaft of a colonnette.
In sector Ζ2 the surface was inspected systematically in order to identify possible cuttings to receive the foundation of the circular stepped altar. However, the removal of the contemporary fill, so as reveal here too the same solid layer of pebbles or to show some traces of the foundation of the construction, was not completed. The layer of contemporary fill, 0.20 to 0.50 m. thick, yielded numerous sherds of Geometric pottery, two clay anthropomorphic figurines of the Late Mycenaean and Geometric period, bronze hair-rings (sphikoteres) and one stone bead.

3. To facilitate the future laboratory analysis, the final study and yhr resolving of issues relating to the dating of the five (5) burials found during works in 2009, in the area between the crepis of the throne and the church of St Kyriaki (sectors Ε-Ζ 5-6), the skeletons were removed and transported in special boxes to the storeroom of the V EPCA.

4. Trial trenches were opened on the southwest side of the monumental enclosure (peribolos)-retaining wall (sectors Α2, 3 and 6). This measure was considered necessary in order to reveal fully the structure of the wall, the foundation ditch and the surface of the bedrock on which it was founded, as well as to resolve issues relating to its dating. In sector Α2, outside the corner formed by the enclosure at this point, a flat limestone slab (2.30 x 1.20 m.) resting on the blocks of the monumental construction was removed. Under the slab and around the lowest corner block of the foundation, an L-shaped ditch was revealed, 1.30 m. long, 0.40 m. wide and 0.50 m. deep.
Inside the peribolos, within the spaces formed by the buttresses in the northeast corner of sectors Α2 and Α3, a layer of fill about 0.20 m. thick was removed, revealing the solid structure of the construction, the same as that already visible in the remaining part of the wall.
Two other trial trenches were opened for the same reasons. The first (dimensions 0.60 x 0.30 x0.50 m.) inside the enclosure and the lowest layer of its foundation in sector Α5, the second (length 1.50 m., width 0.60 m. and depth 0.30 m.) along the west edge of sector Α6 and outside the lowest surviving part of the enclosure. Both trenches yielded scant potsherds of the Geometric, Archaic and Classical periods.

II) Mending, restoration and trial correlations of architectural elements
During 2011 the mending of fragments of architectural members of the throne continued, both at the archaeological site and in the storeroom of the V EPCA. This task was carried out by the experienced marble craftsman Dimitris Lambrou, under the supervision of Themis Bilis and Maria Magnisali, and is aimed at restoring the structural integrity of the monument’s components. Titanium coils of varying thickness, white Portland cement and fine-grained quartz sand were used, while plaster casts were made, wherever deemed necessary, so as to complete the missing parts with new marble. Specifically, the following pieces were mended:

The architects Maria Magnisali and Themistoklis Bilis continued the trial placements of architectural members in certain ensembles from the structural elements of the throne, which could be used in the final configuration of the archaeological site for the suggestive enhancement of the monument. From this work and the study of the relevant material, new evidence emerged not only on the identity of scattered architectural members, but also on the restoration of the architectural construction. For this purpose, the lower part of one column was moved from the storeroom of the V EPCA to the archaeological site and placed upon the step of the stylobate. This part, together with the already restored entablature of many stones upon the wall, in the V EPCA storeroom, will enable the calculation of the width of one of the wings of the throne and will facilitate the graphic, at least, reconstruction. Last, the two orthostats that were mended in 2010 were also placed on the same terrace.
Study of the conglomerate stones constituting the conch of the earlier church of St Kyriaki continued. The hypothesis that these may have originally formed a continuous foundation in the interior of the throne, for the load-bearing elements of the floor and the walls, is being investigated. These stones were dispersed when the later buildings brought to light in the north part of the archaeological site were built. Their interpretation and the dating of the conch may provide evidence on the destruction of the throne and of the pedestal on which the cult effigy (xoanon) stood.
Professor Manolis Korres completed the study of the large limestone blocks that had been placed in second use to the west of the crepis of the throne. His research led to a proposal for the restoration of the pedestal on which the xoanon of Apollo stood and which, according to Pausanias, enclosed the tomb of Hyakinthos.
The excavation trenches, the architectural members, as well as the finds resulting from this year’s works, have been documented, drawn, photographed and digitized. The photographing, measured drawing and documentation of the architectural members built into the walls of St Kyriaki church, as well as of those kept in the Sparta Archaeological Museum, continued.
In the Sparta Museum the exhibition of architectural members from the Amyklaion was rearranged, in order to examine more thoroughly the lower surface of the well-known architectural member (epistyle) with the incised inscription ΔΑΜΟΚΑΜΟΣ. 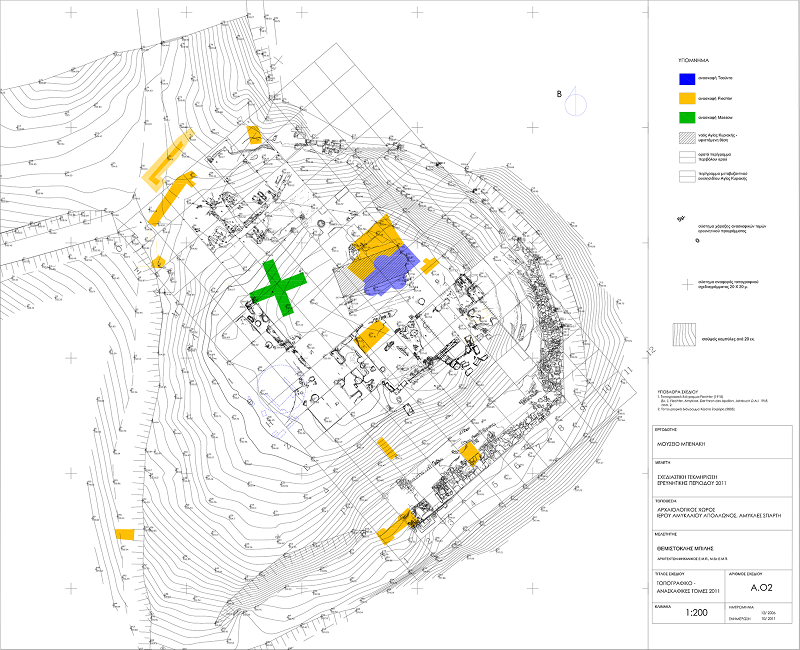