During the year 2012, in accordance with decision no. ΥΠΠΟΤ/ΓΔΑΠΚ/ΑΡΧ/Α2/Φ42/54670/675/15.6.2012 of the Ministry of Culture, the following works were carried out in the Spartan sanctuary of Apollo Amyklaios:

B) Mending, restoration and trial correlation of architectural members

This season’s works at the archaeological site included the mending of fragments of architectural members of the Throne. Carried out by the marble technician Dimitris Lambros, under the supervision of the architects Themistoklis Bilis and Maria Magnisali, aim of this measure is to restore the structural self-sufficiency of the monument’s components. The materials used were titanium coils of assorted cross-sections, white Portland-type cement and fine-grained quartz sand. Wherever deemed essential, plaster casts were taken, in order to complete the carving in new marble of the completions of missing parts.

The architects continued the trial placements of architectural members in certain ensembles of structural elements of the Throne, which could be used in the final presentation of the archaeological site for the at least indicative enhancement of the monument. From the processing and study of the material new data emerged, not only relating to the identification of dispersed architectural fragments, but also to the at least graphic restoration of the monument. For this purpose the following pieces were transferred from the storeroom of the V Ephorate of Prehistoric and Classical Antiquities: the shafts of columns inv. nos Λ410, Λ408, Λ402, Λ407, the capitals of the antae inv. nos Λ 428, Λ421, parts of entablatures inv. nos Λ400, Λ409, Μ10 (study cat. no.), of cornices inv. nos Λ415-6-7/ Λ385, Μ19-20 (study cat. no.) and of crownings inv. nos Λ379, Λ368, Λ275, and the sima inv. no. Λ411.

The excavation trenches, the architectural members, as well as all other finds resulting from this season’s investigations, have been drawn, photographed and digitized.

C) Other works. In the framework of studying the material gathered in the course of the research project, the electronic database was updated. It is planned to make the database available on the Internet, facilitating on-line access for all agents involved. For the fullest mapping of the archaeological site and the works carried out to date, aerial photographs were taken of Agia Kyriaki hill by the photographer Costas Xenikakis. 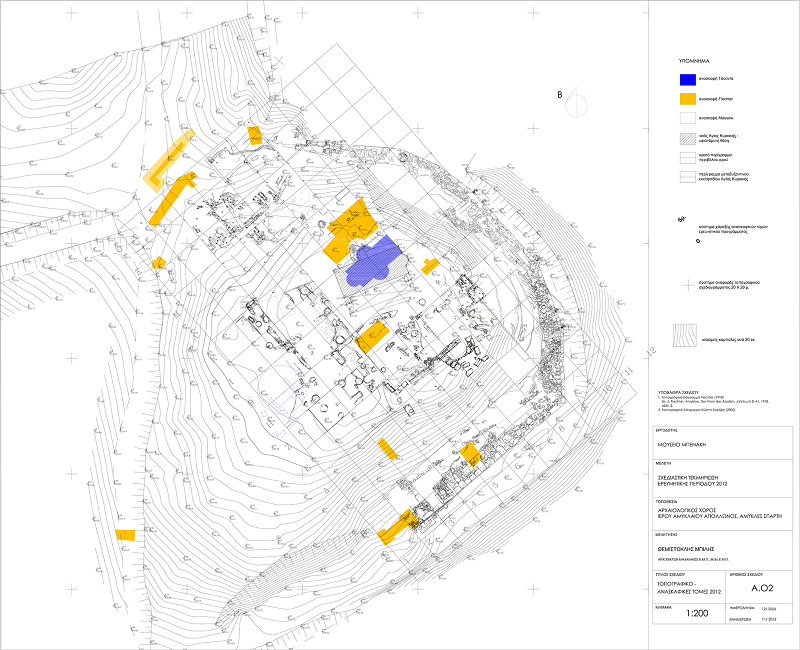