30-09-2013 13:57
Excavations started in previous years, with the aim of investigating the subsoil in the northwest part of the sanctuary, were expanded in 2013 into grid-squares Κ 3-6, Λ 2-5, Μ 2-4, Ν 1-3, Ξ 1-2. The procedure was particularly careful, due to the absence of thick fill, and the stratigraphy proved to be considerably disturbed by the earlier excavation trenches opened by E. Fiechter (1907) and E. Buschor (1925).

In grid-squares Π 3-4, Ν 8, Μ 10, Z-H 11, A 8, -A 8, A 5 excavation trenches were opened along the length of the passage immediately outside the Archaic peribolos-monumental retaining wall encircling the hill of Agia Kyriak on its north, east and south sides. Aim of these works was to uncover the foundation trench of the precinct wall along its visible exterior flank and to resolve issues relating to its dating.
Found in the excavation trenches in grid-squares Π 3-4 was a Byzntine wall (l. 2.60 m., th. 0.50 m.) that had already been located by Ε. Fiechter in the early twentieth century and is constructed of small fieldstones and roughly-dressed stones.
In grid-squares Ν 8 and Μ 10 fill disturbed by later interventions was removed, of maximum thickness 1.10-2 m. Uncovered at a depth of about 0.90 m. in grid-square Ν 8 were three of the four cement bases of the recent metal water-tank that had been removed from the site in 2005, in the course of clearing operations. The ancient level below these included a small quantity of Early Helladic and Geometric pottery with parts of zoomorphic and Psi-type Mycenaean figurines. The bedrock on which the Archaic peribolos stands slopes steeply northward here (to a depth of 0.90 m.-1.10 m.), ruling out the existence of a passage.
This situation is observed also in grid-square Μ 10, where the surface of the bedrock slopes northward to a depth of 1.35 m. to 2.10 m. Furthermore, it was ascertained that in the southeast corner of the grid-square, between the two sections of the peribolos that meet there, there is a void about 0.50 m. long. Thus it is deduced that these two sections of the peribolos are independent of each other (peribolos section Α: grid-squares Μ 9, Ν 8, peribolos section Β: grid-squares Ι-Κ-Λ 10).
Nonetheless, the existence of a passage outside the peribolos is confirmed in grid-squares Ζ-Η 11. Here and for the entire width of the trenches, the flat surface of the cut porous bedrock in which the Archaic peribolos was founded, was exposed directly after the removal of the surface layer of the modern fill, at a depth of about 0.30 m. Indeed, the outside of the peribolos in grid-square Ζ 11, with the visible disturbance of the masonry, generates the hypothesis that at this point, where the curved end of the preceding Geometric peribolos also terminates, an entrance must have existed.
The existence of the same Archaic passage over the entire width of the present terrace outside the peribolos is confirmed on the south side of the hill too. Specifically, in grid-squares Α 5, Α 8, -Α 8, as well as in grid-square Α 2, the flat surface of the cut porous bedrock, of maximum width 7 m., appears. Particularly notable are the finds from grid-square Α 5, as the stratigraphy has not been disturbed by later intervention. On the north side of the trench the courses of the subfoundation of the peribolos are bedded in the first level of the ancient fill, approx. 0.15 m. thick, which contains Geometric and Archaic pottery. Beneath this is the second level, approx. 0.10 m. thick, with pottery of prehistoric, Protogeometric and Geometric times, while the lowest third level, 0.60 m. thick appears, yielded exclusively pottery of the Early Helladic and the Middle Helladic period. Found in the second level were sporadic concentrations of ash and one bronze Geometric warrior figurine (h. 0.10 m.).
The picture from grid-square Α 8 is similar. Along its north flank was revealed a large number of fieldstones defining the continuation of the trench southwards. At the centre of the adjacent grid-square –Α 8, the concentration of randomly fallen fieldstones mixed with ash and plaster points to some later intervention in the space and disturbance of the stratigraphy down to the level of the Early Helladic pottery. 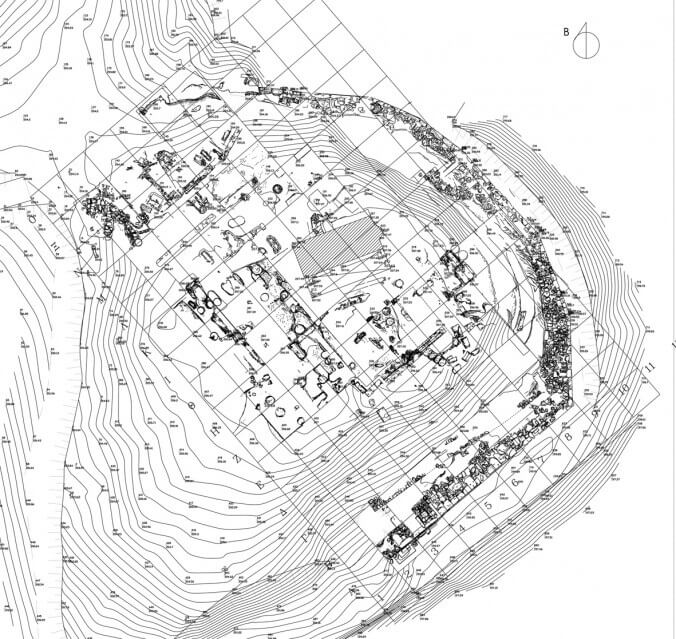