Cleaning of the cave-like trench, 1×1 m. and 1.10 m. deep, at about the centre of grid square Λ4, was completed. A layer approximately 0.10 m. thick, of soft brownish yellow earth containing fieldstones, fragments of roof tiles, a small quantity of bones and traces of charcoal, was removed. That this trench was used in a second phase for burial is underscored by the find of the lower jaw and chest bones of a human skeleton, along the length of the west limit of the trench.

Another cave-like trench had been identified in 2013, at about the midpoint of the west limit of grid square Λ4. The remaining layer, about 0.35 m. thick, of dark soft brownish-grey earth containing traces of charcoal, a considerable quantity of roof-tile fragments, bones, shells and potsherds, sometimes with charred surface, was removed from inside the trench. Cut in the porous bedrock, the trench is cylindrical with an almost flat bottom, of maximum depth 1.20 m. and diameter 1.11 m. At a depth of 0.80 m. below the ground surface, an inverted Ionic column capital with chipped corners, measuring 0.40 x 0.40 m. and diameter 0.50 m., was revealed. The combination of architectural members and traces of burning in the trench suggests that a lime kiln was operating at this point in Byzantine times.

Approximately 500 m. west of the entrance to the church of St Kyriaki, a vertical circular cavity had been located in 2012. In the 2015 season, the final layer of fill, 0.10 m. thick, of brown earth with very little pottery, was removed. The cavity is 2.00 m. deep with a flat bottom 1.00 m. in diameter.

The remains of a square cistern of Roman times, which was contiguous with the outer, west side of the peribolos, were brought to light in grid squares Μ–Ν 1,-1. The construction must have been roofed, with an entrance most probably from above, as no opening was observed in the walls. The interior of the cistern was covered completely by a destruction layer, as dominant among the earth were fragments of terracotta floor tiles and roof tiles, as well as fieldstones, that is, parts of the superstructure of the walls of the cistern.

The floor survives in good condition and consists of square terracotta tiles of side 0.30 m., with plaster grouting. At the point of contact of the walls with the floor runs a terracotta skirting (base moulding) 0.60 m. high and 0.08 m. thick. At the midpoint of the west side is a circular outlet hole and in about the centre of the floor and to the northeast is a circular opening in which a clay basin (lekanis) had been placed.

Inside the basin, diameter 0.37 m. (diameter of bottom 0.20 m.) and depth 0.22 m., was a clay bowl with red burnish inside and outside (terra sigillata). On the bottom of the bowl is stamped decoration of a row of fine leaves. The basin was completely covered by a Doric column capital (0.60 × 0.60 m. diameter 0.34 m.) of the type with hypotrachelion and zone of bead-and-reel moulding. This architectural member certainly belonged typologically and chronologically to the Throne, and completes a corresponding but fragmentarily preserved capital in the Sparta Archaeological Museum.

The walls of the cistern, ranging in thickness from 1.10 to 1.20 m. consist of two parts: an inner zone approximately 0.35 m. thick, of successive courses of terracotta tiles and lime plaster as mortar, and an outer, more robust construction, 0.60 to 0.80 m. thick, of rubble masonry and lime plaster. The face of the inner zone is coated entirely with red hydraulic plaster. Last, the two parts are cemented together by a thick layer of lime plaster. At right angle to the midpoint of the east wall is a smaller wall 1.34 m. long, 0.63 m. thick and 0.81 m. high. It lies on the east-west axis and its superstructure consists of successive courses of tiles and fieldstones with lime-plaster mortar. Its long sides (north and south) are coated entirely with red hydraulic plaster. On the narrow west side, facing the interior of the cistern, are three steps. This transverse wall is a later addition, as it is not united organically with the existing structures (floor tiles, skirting, wall) but rests on them. It was added most probably in a second phase, in order to facilitate access to the interior of the cistern from the east.

Directly south of this cistern, the continuation of its east wall, which abutted and was incorporated in the course of the peribolos, was uncovered for a length of 15 m. to the southwest. Visible in grid squares Μ-1, Λ-1,-2 is the structure and the outline of the monument, which was orientated north-south and had an overall length, starting from the gateway to the sanctuary, of approximately 25 m. The yellowish porous and sometimes conglomerate bedrock had been cut in order to underpin as a step the sub-foundation of the peribolos in this area, presenting a similar picture to the corresponding parts of the monument on the south and east slopes of the hill. Preserved in places is also the lowest course of the foundations of the peribolos, consisting of large fieldstones placed in line. With the completion of works at this point it becomes clear that the peribolos construction had collapsed and its building material had been pillaged in a later phase.

A large number of moveable finds, mainly pottery but also minor objects such as bronzes and ivories, was amassed from the works carried out in all the excavation trenches. Chronologically they span the entire spectrum of life at the site, from prehistoric into Byzantine times, and belong to the category of votive-cultic objects and of domestic artifacts.

One further important issue dealt with in the current research is the management of the results of the optical-scanner measurements in a GIS environment. In this way the documentation not only of the actual monuments but also of their environs was completed. 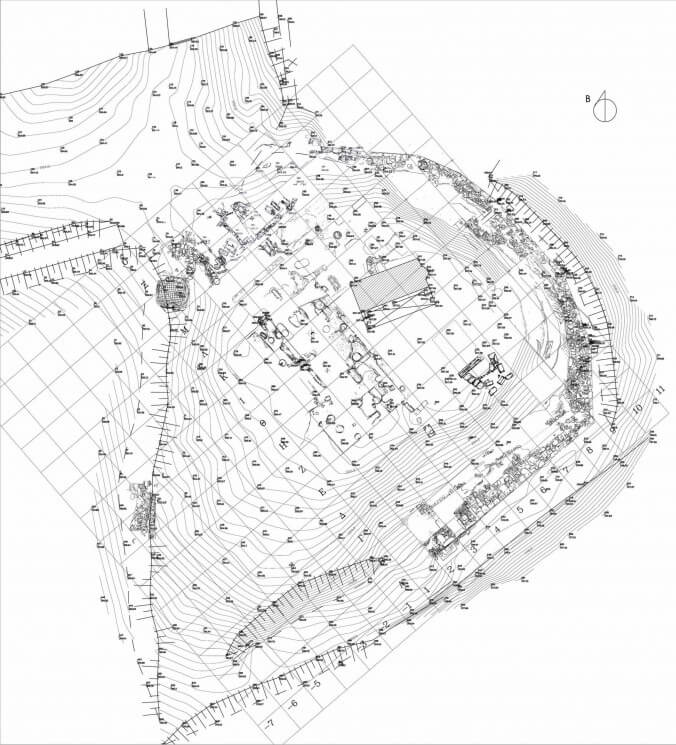