Subject: Amykles Research Project: Report on works during 2018 in the Sanctuary of Apollo Amyklaios in Sparta.

The foundations of a building of Π-shaped plan, named conventionally ‘south building’, were uncovered in the south part of the hill in 2017. Investigations in 2018 concentrated on determining the limits of these remains, to the east, west and south.

From this year’s research it was ascertained that this is a quadrilateral or rectangular building, measuring 22 m x 8 m x 6 m. Unfortunately the entire south side is missing, possibly due to subsidence of the ground, as indicated also by the oblique course of the geological levels at this point and the abrupt height difference between them. To the north the building functioned also as a retaining wall, as this side abutted the cut hillslope. Τhe west end was formed by cutting the conglomerate bedrock, which functioned also as socle of the superstructure. Characteristic feature of the building is the closed inverted-L-shaped corridor occupying the west and north sides. It is concluded from the finds that the corridor was roofed and its superstructure was of fired bricks. Inside the corridor the under-layer of a floor was revealed, 0.20 m thick and of packed earth mixed with small pebbles. The east side the building is delimited by just one wall constructed on the porous bedrock and reinforced, later, along its entire length by a second wall in contact with it. From this formation it is suspected that the centre of the building was an open space. In the east part of the ‘atrium’ the porous chalk ground (kimilia) was reached, with strong traces of red, grey and black colour. In addition, collected up from this area were iron tools, lumps of glass and burnt lumps of clay, which were associated with workshop installations, in all likelihood kilns that operated in this space in the Late Roman period.

Of particular interest is the east side of the building, where evidence dating it to the late sixth century BC was found. This dating is supported both by the stratigraphy and moveable finds, and by the foundation of a wall, approx. 2 m wide, that was brought to light for a length of 7.60 m and intersects the east side of the building at right angle.

This structure, which consists of two courses of roughly-worked large and medium-sized limestone blocks, and small stones as packing, is bedded on a stepped surface cut in the porous bedrock. Along its south side, which was also the outer face of the wall, between the large stones of the façade but mainly in front of these, were numerous intact and broken aryballoi and other miniature vases, such as kantharoi, lakaines and cups, which are dated to the seventh and sixth centuries BC, as well as iron spits and part of a bronze helmet. Both the kinds of objects and their quantity, as well as the fact that earth in the layer in which they were found was black in places, with traces of burning, suggest that there was an organized activity of cultic/ceremonial character in this area.

The finds recovered –7,059 potsherds were counted– in combination with the stratigraphy advocate a dating of the wall in the early seventh century BC. Moreover, from the construction technique and the monumental dimensions of the wall, it can be argued that this is part of the Late Geometric peribolos that was uncovered in the 2006 and 2010 excavation seasons, along the south and east sides of the hill.

The destruction of the wall, and of the early peribolos at this point at least, should be dated in the second half of the sixth century BC, when the ‘south building’ was created. A second destruction phase of the wall and use of its material is dated to Late Roman times, when a new space was constructed directly north, of which only the foundations of two walls forming a right angle survive.

Works on the enhancement of the archaeological site.

With the aim of enhancing the monumentality of the peribolos and the demarcation of it to a satisfactory degree, the first phase of a partial restoration (anastelosis) of the monument was completed. A layer of artificial stones was added along the entire length of the south side, resulting in the visualization of the system of the superstructure and the retention of the earth of the hill in this area. The project for the anastelosis of the peribolos was a pioneering application of new restoration methods and techniques, on account of the procedure of producing and placing the cast stone. The use of this was deemed essential because of the rarity and the particularities of the ancient material (conglomerate limestone), as well as of the monumental dimensions of the blocks forming the structure, which are over 2.60 m long. 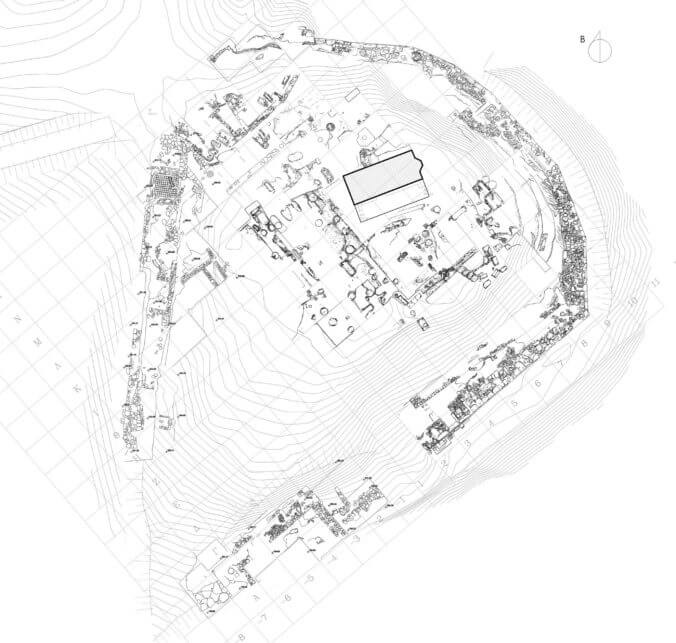