Following the unearthing of the monumental entrance in the northwest part of Agia Kyriaki hill, in 2013, and of all the remains along the length of the west slope of the hill, which brought to light both the continuation of the Archaic precinct wall (peribolos) and the Late Antique constructions abutting it, in 2015-2016, investigations in 2017 concentrated on: Α) the southwest part of the hill, which had not been explored in the past and Β) the area lying directly north of the sanctuary’s circular altar, which is now partially restored in its original position.

This year’s excavations in the southwest area of the hill were conducted in a space 20 m long by 7 m wide, which is defined by grid-squares Α-Γ -3 to -6.

Immediately below the fill, which ranged in depth from 0.20 m to 0.80 m, the foundation of what appeared to be two Archaic buildings was revealed. These are of inverted L and Π plan, have the same east-west orientation and are ‘open’ towards the south. There is very little difference in the structure and the construction technique of the two buildings, which are founded in cuttings made in the chalky layer (kimelia) of the bedrock. That of inverted L plan consists of small and medium-size unworked limestone blocks and incorporates part of the bedrock in its north side. That of Π plan consists of large rough stones set in line. In neither building was lime plaster used as mortar. There are similarities in both the material and the manner of construction of these structures, as well as in their dimensions, and they can be dated to Archaic and Late Classical or Hellenistic times. In all probability, this is actually one building, to which interventions and changes had been made in a later phase, after a destruction caused by an earthquake, as the curvature visible on the outer east wall indicates. The destruction level of compacted red clayey soil and fragments of roof tiles, which was revealed at various places in the space, points also to the superstructure of the building, which had mud-brick walls and was roofed by terracotta tiles of Laconian type. All the above elements allow an interpretation of the space as a stoa for multiple uses (place of dedications, hestiatorion, assembly space, etc.). This identification is boosted, furthermore, by the location of the building close to the southwest end of the peribolos of the Archaic and Geometric periods: in the gap created between these points there was a second entrance upon the central north-south axis that bisects the sanctuary and diametrically opposite the central gate to the north. This is a channel of communication between the hilltop and the sanctuary’s ancillary installations, which are beginning to come to light on the margins of the hill. The final and integrated interpretation and mapping of this newly-revealed building will be made in 2018, when the southwest side of Agia Kyriaki hill will be uncovered in its entirety.

It is noteworthy that among the finds recovered from the site are a bronze griffin head, which was an appliqué of a bronze cauldron of the late eighth century BC, a bronze bird pendant of the Archaic period and a fragment of a small terracotta male figurine of the same years. From the results of the initial study of the pottery, it is clear that in a total of 2,239 sherds the pottery of Geometric and Archaic times is proportionately much greater than that of the other periods.

On the summit of Agia Kyriaki hill and directly north of the circular altar that has been restored in its original position, architectural remains of the Early Byzantine period were uncovered.

After removing the layers of contemporary fill, approximately 0.30 m deep and consisting of small fieldstones mixed with fragments of roof tiles and pieces of plaster, walls running east-west and north-south, meeting at right angles, were revealed. The arrangement of the walls and their southward extension permit their correlation with the finds from the excavations conducted in the space by Christos Tsountas, in 1890. The combination of these data with the fact that the masonry is of small fieldstones set in two courses, leads to the conclusion that the walls are part of a spacious building of rectangular plan of the Early Byzantine period (6th c. AD), approx. 15 m long and 7 m wide, orientated north-south, but of so far unknown function and use.

Of particular interest is the preliminary evaluation of the moveable finds from the area, as these, in contrast to the architectural remains, point to the predominance of Geometric ceramic production in a total of 3,648 sherds. Of the finds recovered in the course of works carried out in the space, outstanding are the bronze objects, a hare figurine and a bracelet, as well as a marble Doric column capital of the Roman period, which was found built into the fabric of one of the revealed walls.

C) Works for the presentation of the archaeological site. 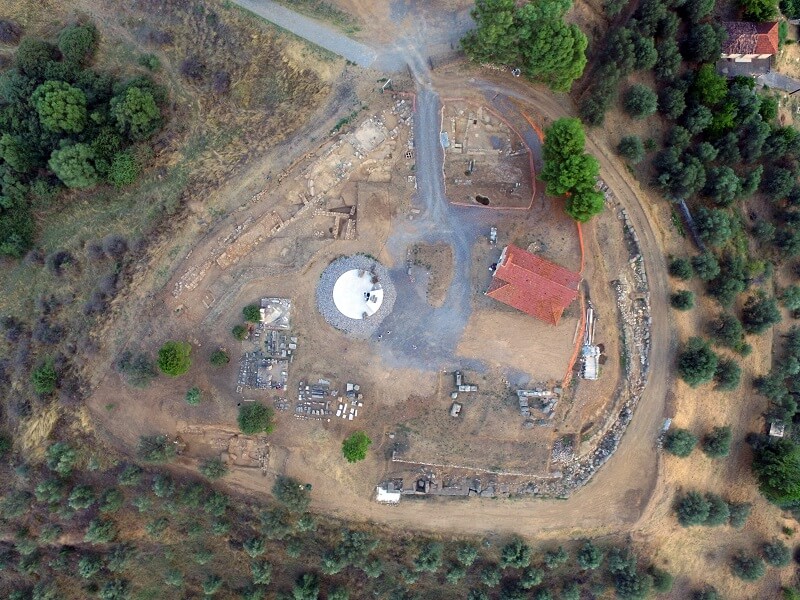