During the 2019 season of the Project, the uncovering of the surviving stretch of the fortification wall in the south area of the hill was completed. Part of the fortification wall was identified in 2018 directly east of the so-called South Building, the east side of which it intersects at right angle. Aim of this year’s excavation was on the one hand to interpret this construction and correlate it with any monumental structures in the wider space, and on the other to elucidate the hypothesis that a further access to the sanctuary existed at this point.

It is known from the bibliography that this particular location had been excavated by Ernst Buschor, who in 1925 brought to light 10 meters to the east of the west end of the ancient peribolos, a rubble-masonry wall that he dated to Byzantine times on the basis of the construction technique and the lime plaster found in places and was considered connective matter [Buschor, ΑΜ 52 (1927), 30-31, fig. 15].

It emerges from the surviving foundation that this monumental construction is bedded upon the porous bedrock, which has been cut in stepped formation. The foundation comprises two parallel courses of large and medium-size unworked limestone blocks, while on the upper level, which is the inner north limit of the fortification wall, is a further course of medium-size rough-hewn limestone blocks. Small stones mask the interstices. The revealed section of the fortification wall stands to a height of 1.10 m, is of overall length 21.00 m and the thickness of its foundation ranges from 1.30 to 1.80 m.

The recent excavation evidence from the space along the south side of the fortification wall, in front of the stones of its façade, as well as from its uppermost surviving surface, confirm the findings of last year’s investigations. Namely, that these points were covered by a layer of dark earth with traces of combustion, which contained a large number of miniature vases (some 2,000 have been counted), such as small cups (kantharoi), amphorae, censers (thymiateria) and lakaines, as well as intact and broken aryballoi of Laconian type, which on the basis of their typology are dated to the seventh and sixth centuries BC. Recovered too were bone artifacts and an assemblage of metal objects, such as hair-rings (sphekoterai) and plaquettes. Animal bones were also collected sporadically. Directly below this layer is a fill (epichosi) of brownish-yellow clayey soil. This was removed to uncover the yellowish porous bedrock (kimilia) over the entire excavated area, that is, the bedrock that was cut in order to form the bedding of the foundation of the fortification wall. Pottery collected from this level dates from the Early Helladic down to the Early Archaic period.
The above evidence advocates an interpretation that takes into account the following interventions in the wider area: The earliest, initial intervention in the bedrock must have been made in the Early Helladic period, in the settlement that spread from the top of the hill to its slopes. This was followed in the early seventh century BC by the cutting of the rock for the purpose of erecting the first peribolos of the sanctuary, which towards the east continued its course for about 5 m north (this section was excavated along its entire length in the years 2006-2009). This year’s works show that the Late Geometric peribolos of the early sanctuary traversed the whole length of the south side of the hill! During the sixth century BC, when the ‘South Building’ was constructed and along with the Throne the new monumental peribolos, the section of the old fortification wall had collapsed and now functioned as a locus ritualis. That in this period there was in this area organized cultic activity is confirmed not only by the composition of the earth in the dark layer, but also by the kind of finds and their quantity.

Among the fragments of the clay objects is part of the head of an owl figurine with black glaze, and a roof tile with an incised inscription in two lines, discernible in the second of which is the name ΗΟΡΜΙΠΠΟΣ (ORMIPPOS). Among the characteristic metal finds are iron spits and tools, lead hoops, as well as bronze beads and eyelids. Other noteworthy finds are the bone objects, specifically some small plaques with incised decoration, and numerous knuckle-bones (astragaloi).

Last, in front of the east section of the fortification wall and in a layer directly above the layer with the dark earth and the concentration of miniature vases, parts of clay molds with traces of burning were unearthed, on the inside of some of which are imprints of bronze. This fact, in combination with the iron tools and the lumps of slag and glass paste, which were found here and exactly south of the fortification wall, suggest that these finds are discards of workshop activity for casting bronze statues inside the sanctuary. This production should be associated with the corresponding installations found at a central point of the Amyklaion, specifically on the top of the hill, in 2013. Uncovered here, in a space measuring 9.00 m x 12.00 m, were four (4) cavities in the bedrock, each of different shape and size, with disturbed fill inside them but, unfortunately, without diagnostic finds (see Vlizos S. 2017, “Das Heiligtum und seine Beigaben: Bronzestatuetten vom Amyklaion”, in H. Frielinghaus – J. Stroszeck (Hrsg), Kulte und Heiligtümer in Griechenland: Neue Funde und Forschungen, Möhnsee, 71-95). 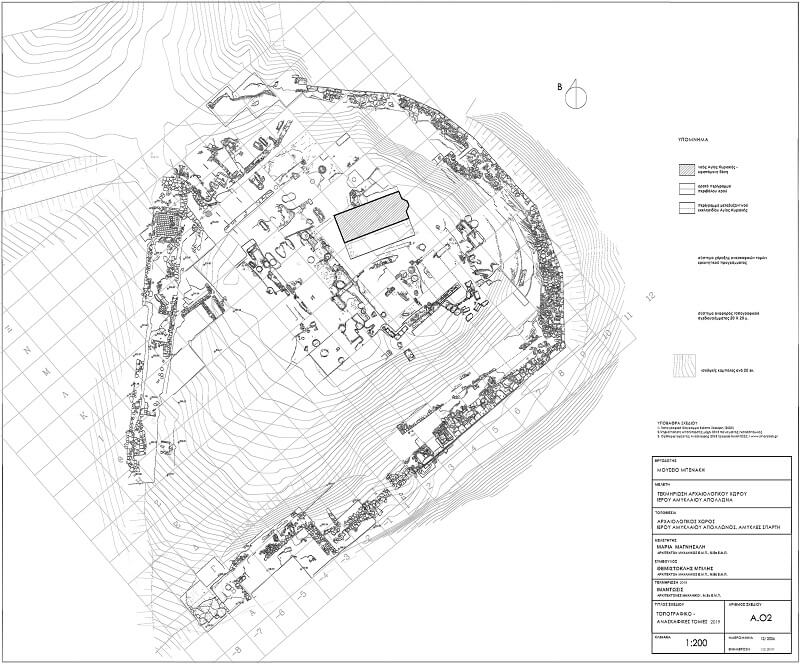